Endorphins: ever heard of them? When you read this article, you will know the facts about endorphins and the effect they have on our lives.

So for starters, what are endorphins? Endorphins are hormones in humans and other animals. Endorphins are formed and accumulated in the pituitary gland. For more information on hormones, read the article: The Importance of Hormones on this website.

One of the important functions of hormones is to regulate our moods. Endorphins belong to a group of hormones known as “happy hormones.” These hormones are known to help promote positive feelings; including happiness and pleasure. In addition to endorphins, the other hormones that belong to this group are: dopamine, serotonin, and oxytocin. These will be covered separately in subsequent articles. But note that they all work together to form our overall mood function.

For example: you may have heard of a high feeling after exercise therefore you may already know about the link between exercise and the release of endorphins. However, exercise doesn’t work only on endorphins. Recurrent physical activity can also increase both dopamine and serotonin
levels, making it a great option to boost one’s happy hormones. So, exercise can make one very happy!

What is the Function of Endorphins

Endorphins have several physiological functions. They are peptides which activate the body’s opiate receptors, causing a pain-relieving effect. The word endorphin comes from putting together a combination of the words 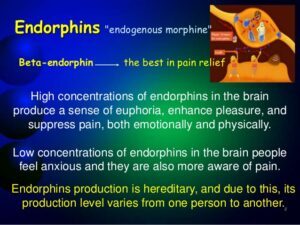 endogenous, meaning from inside the body, and morphine, which is an opiate pain reliever. In other words, endorphins are natural pain relievers.

Since endorphins take action on the opiate receptors in our brains, they reduce pain and boost pleasure that result in a feeling of well-being. Endorphins are freed in reaction to pain or stress, but they’re also during other activities, such as eating, exercise, or sex. Is there any wonder why there is a massive opioid addiction?

All of the roles endorphins play in the body are not totally understood. It is known that endorphins are crucial to reduce pain and increase pleasure.

Endorphins are involved in our natural reward circuits and are related to important activities like the ones I listed above. Endorphins also surge during pregnancy. They minimize discomfort and pain and maximize pleasure. This helps individuals to continue functioning despite injury or stress. Since we humans naturally seek to feel pleasure and avoid pain, we’re more likely to engage in an activity that makes us feel good.

The Health Benefits of Endorphins

Because endorphins promote an overall sense of well-being they have many benefits, which include:

Easing depression – Studies have shown that nearly one in five people will experience depression at some point during their lifetimes. Studies have also shown indications that exercise have a positive effect on depression due to an increased release of endorphins following exercise.

Many studies have looked at exercise in reducing the symptoms of depression, and the majority of these studies have shown a positive benefit associated with exercise. More research is required to further understand 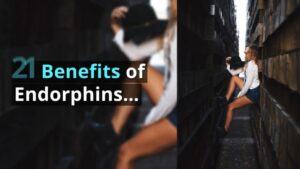 the role that endorphins have in treating depression.

Reduces stress and anxiety – Endorphins may play a significant role in reducing stress and anxiety. A study in mice showed a complete link between endorphin levels and anxious behavior in mice. However, further research studies in humans are needed.

Enhance self-esteem – Positive feelings also make individuals feel confident and affirmative, consequently giving self-esteem a lift. In one small study, endorphins were linked with high self-esteem in a small group of men. However, much larger studies are required.

Reduces weight – The role of endorphins and other hormones in controlling appetite and food intake is complicated. While eating good food is thought to increase endorphin levels, higher levels of endorphins have also been shown in studies involving animals to help regulate the appetite. More research in humans is also needed to shed light on these effects.

Aid with pain during childbirth –Childbirth can be a rewarding, but extremely painful experience. Endorphins are capable of making labor a tad easier. A study in 45 healthy women giving birth found that low levels of beta-endorphin at the end of pregnancy were associated with a need for additional pain treatment medications during labor. Additional research is needed to establish the exact cause and effect.

The Effects of Low Endorphins

When endorphin levels are deficient, an individual’s health may be negatively impacted. The research into the connection between endorphins and health conditions is continuing.

Some studies have shown a potential link between the following health problems and low endorphin levels: 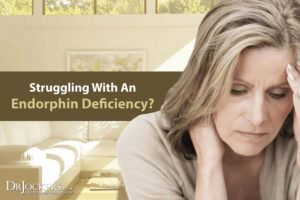 Depression – Without enough endorphins, an individual may be more likely to have depression. An article in the American Journal of Psychiatry discusses the long-standing use of opioid treatments for depression, particularly in cases where other treatments have not worked.

Another article suggests that higher endorphin levels have an impact on depression symptoms due to their association with reward.

Fibromyalgia – Fibromyalgia is a condition that causes persistent muscle pain and tenderness. It is believed that it amplifies painful sensations by affecting the way the brain processes pain signals.

Common symptoms of fibromyalgia include:

Another study found that increases in the body’s endorphins were associated with pain relief in people with fibromyalgia.

Individuals with fibromyalgia may be recommended to do certain activities to boost endorphins, such as exercise, connecting with others, and stress-relieving activities, such as yoga. They may additionally be prescribed medications to help with symptoms.

Chronic headaches – One possible cause of ongoing headaches is abnormal endorphin levels. Some research proposes that the same endorphin difference that plays a role to depression also exists in people who have chronic headaches.

How to Boost Endorphins

While exercise releases endorphins, an individual doesn’t have to run a total extended race to experience the pleasurable effects of an endorphin release. Our bodies will also produce endorphins naturally when individuals participate in the following:

Select foods may also have an influence on hormone quantities:

There are several supplements that may help increase endorphin levels. Here are just a few to consider:

Tyrosine – Tyrosine is an amino acid that the body produces from phenylalanine. Supplementing with it is believed to increase important

brain chemicals such as endorphins, which affect one’s mood and stress response.

Green Tea – Although green tea contains less caffeine than coffee, it is enough to produce an effect. It also contains the amino acid L-theanine, which can work synergistically with caffeine to improve brain function including endorphin production.

Probiotics – Probiotics which are generally beneficial bacteria provide all 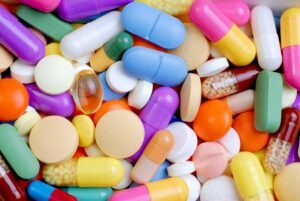 sorts of powerful benefits for the body and brain. They can are more commonly known to improve digestive health, but they also promote heart health and reduce depression by aiding in the production of endorphins

Tryptophan – Tryptophan is an essential amino acid that serves several important purposes, such as nitrogen stability in adults and growth development in infants. It also creates niacin that is essential in producing the neurotransmitter serotonin. Serotonin in the brain is believed to control anxiety, happiness, and mood by increasing endorphin levels. Low levels of the serotonin have been associated with depression, and increased serotonin levels brought on by medication are thought to decrease arousal.

Note that in order for tryptophan to be transformed into niacin, the body needs to have enough iron, vitamin B-6, and vitamin B-2.

Professionals studying the results of supplements have found mixed results. Also, note that many studies involved animals only, therefore more research is required to help support the benefits of supplements for humans.

While supplements can be helpful, some aren’t optional for individuals with certain health conditions. They can also interact with certain medications; therefore it is highly advisable to consult with a healthcare provider before trying them.

If you do decide to take any supplements, be sure to read all package instructions and stick to the suggested dose, in view of the fact that some can have negative effects at high doses.

Where to buy Endorphin Supplements

Amazon has a great selection of endorphin supplements. For a peek you can click here.

8 thoughts on “Facts about Endorphins: The Happy Hormone”