Dopamine pronounced doe·puh·meen is known as is the feel good hormone.  You’ll find out why as you read on and discover the facts about dopamine.

Dopamine is a hormone produced in the brain and transmitted by the nervous system between nerve cells.  This is why hormones are called chemical messengers.  For more information on hormones, read the article: 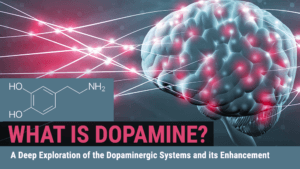 Dopamine belongs to a group of hormones known as “happy hormones.” It is produced in the brain by means of a two-step process.  For starters, it changes the amino acid tyrosine to a substance called dopa, and from there on to dopamine.

What does Dopamine do?

Dopamine plays a crucial role in how individuals feel pleasure.  It is a huge part of our distinct human ability to plan and think.  It helps us strive, focus, and have an interest in things.

It also affects many parts of behavior and physical functions, such as:

The Effects of Dopamine Deficiency

The foremost symptom of a dopamine deficiency is depression, the feeling of boredom (chronic boredom), lack of concern or interest, loss of satisfaction, chronic fatigue and low physical energy with no desire to put the body in motion.  There is a universal lack of drive, enthusiasm and motivation.

Other symptoms such as mood swings, food cravings and depression, poor attention levels, can also manifest.  Individuals who suffer from low dopamine level are more susceptible to form some kind of addiction.  Specifically, one dopamine receptor is linked to an individual’s “risk-taking” side. 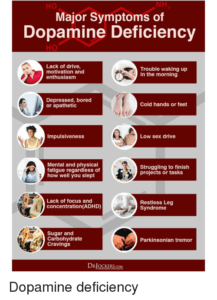 in the brain to communicate and control movement.  In Parkinson’s, one type of neuron steadily degenerates.  It doesn’t have a signal to send anymore; as a result the body makes less dopamine.  This chemical imbalance causes physical symptoms.  These include tremor, stiffness, and slowness of spontaneous movement, poor balance, and poor coordination.  Doctors treat these symptoms with medications that raise the levels of this chemical.  This consequence on the body’s movement and control can be permanent.

Rapid weight gain can occur.  Low levels of dopamine in the body tend to make an individual crave for harmful indulgences such as sodas, alcohol, sugary food and saturated fats.  These longings result in gaining weight rapidly.  This condition is further goaded by the individual’s lack of motivation to move and exercise, immobility and feeling of fatigue.  Additionally, studies have established that uncontrollable consumption of sugar, refined foods and saturated fats can sink dopamine levels and lessen activity in the brain.

Obesity can be a result.  Most of the time, if an individual takes in more calories than is burnt, they’ll gain weight.  So then obese people can merely eat less and slim down—right?  Of only the answer was that simple.  They may face issues that are uncommon for most.  They could have an issue with their natural reward systems.  This could be affecting the amount of food they eat before they feel satisfied.  Imaging studies propose that in individuals with this condition, the body may not release enough dopamine and another feel-good hormone, serotonin (to be covered in a future article).

Having a low libido (Sex Drive).With low dopamine in the body, there is additionally a fading of pleasure.  In this case, the individual will have the incapacity to feel gratification and as a consequence, a dwindling of libido.  If a person is suspect of suffering from dopamine deficiency, they should consult their doctor.  Dopamine levels are simply checked with a simple blood or urine test.

Having to struggle to finish projects or tasks— procrastination.  An individual’s ability to focus and think can be affected even by somewhat low levels of dopamine.  The feeling of despondency due to an insufficient amount of this neurotransmitter to accurately normalize can interfere with the capability to pay attention, to think abstractly or to remember details.  Low dopamine levels affects a person’s capability to commence daily activities (especially exercise) and an inclination to put off doing things and responsibilities as well as a feeling that one is not able to cope with life.

Having restless leg syndrome—Various researches has indicated that restless leg syndrome may be due to an imbalance of dopamine in the brain since this hormone is responsible for transmitting and sending messages that control the muscle movement.  Dopamine deficient individuals can experience weakness of the entire body as well as muscle tremors and seizures.

It’s hard to identify a single cause of most mental health disorders and challenges.  But they are frequently linked to surplus or insufficient amounts dopamine in various parts of the brain.  Examples include:

Schizophrenia—Earlier, researchers believed that symptoms derived from a hyperactive dopamine system.  Presently we know that some are due to too much of this chemical in specific areas of the brain.  This includes hallucinations and delusions.  A lack of it in other parts can cause different signs, such as lack of motivation and desire.

ADHD.  It is not known for certain what causes attention deficit hyperactivity disorder (ADHD).  Some research shows it may be due to a shortage of dopamine.  This problem may be due to your genes.  The common ADHD drug methylphenidate (Ritalin) works by increasing dopamine.

Drug misuse and addiction.  Drugs like cocaine can cause an enormous, fast increase of dopamine in your brain.  That satisfies your natural reward system in a very big way.  But repeated drug use also raises the brink for this type of delight.  This means an individual needs to consume more to get the same effects.  In the interim, these drugs make the body less able to produce dopamine biologically.  This leads to emotional lows when the drug is no longer in the system; otherwise known as crashing.

Dopamine deficiency can occur because of drug use, poor nutrition, and lack 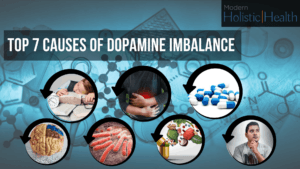 of sleep, stress and chronic use of antidepressants.

Treating dopamine imbalance first involves, determining the cause of it.  Dopamine levels may be lowered directly to a physical or mental condition.  Additionally, studies have shown that, as mentioned earlier, a diet high in sugar and saturated fat and low in protein can significantly affect dopamine levels in the brain.  Also, overweight individuals tend to have lower levels of dopamine.  If a patient is diagnosed with depression, he or she could also be prescribed a medicine which may boost dopamine levels.  Those affected by Parkinson’s disease are often prescribed specific drugs that are shown to be effective at increasing dopamine.

Individuals that have a high amount of dopamine in their systems are usually focused go-getters.  Regrettably, many of the things that folks do to boost their focus and energy end up backfiring.  There are numerous unhealthy ways to seek out a dopamine bump.  For example, anything addicting substance such as nicotine, caffeine, as well as sugar-laden, fat-filled treats that are all very effective at increasing dopamine levels and be 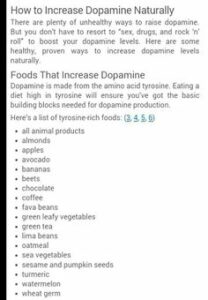 capable of in turn, be the main cause of addictive behavior in our lives.

However, there are some safe, healthy, natural ways to boost our dopamine levels:

Eat foods rich in Tyrosine (an amino acid).  In order to produce dopamine, the body needs tyrosine which can be found in almonds, bananas, avocados, eggs, beans, fish, and chicken.

Exercise regularly.  As a general rule, physical exercise is one of the best things one can do for their brain.  It increases the production of new brain cells, slows down brain cell aging, and can increase the levels of dopamine.  Exercise has also been linked with improved mood and overall a better outlook on life.

Meditate.  The overall health benefits of meditation have been demonstrated through hundreds of research studies.  Many of these have shown that meditation increases dopamine resulting in improved focus and concentration.

Massages help.  It has long been suggested that one way to keep dopamine levels high is to avoid stress, which is close to impossible in these days.  To offset the effects of stress, research has demonstrated that massage therapy boost dopamine levels by nearly 30% while diminishing cortisol (a stress hormone) levels.

Get enough sleep.  To ensure that our brain increases dopamine naturally, it’s best to make sure that we’re getting enough sleep.  This includes setting aside time before bed away from the computer or TV screen.  Sleep assists all the cells in the body to repair and renew themselves.  It gives the brain a chance to wash away toxins that build up during the day and helps keep the nerve cell connections and pathways active and constantly self-renewing.  Lack of sleep has been shown to reduce concentrations of neurotransmitters, including dopamine, and their receptors.  For more information on sleep, please read the article: The Importance of Sleep for Health on this website.

Music helps.  It is not surprising that taking in calming music can increase pleasurable feelings; perk up mood, decrease stress, and aid with focus and concentration.  Research
has established that much of this is accomplished due to an increase in dopamine levels.

Supplements can be valuable in supplementing our food with the valuable nutrients for the production of dopamine.  Amazon has a variety of supplements to choose from.  To take a peak, click here.  [Affiliate link]

Other Uses for Dopamine

This hormone most often plays a secondary function in the body, but in certain medical situations, it is clearly a lifesaver.  Doctors use prescription dopamine (aka: Inotropin) to treat the following conditions:

There are possible complications with any drug, even when taken under close supervision.  The main ones associated with dopamine include:

Because many drugs interact with it, it’s crucial that an individual’s doctor knows all the medications being used.

Questions, comments and concerns are more than welcomed below.

8 thoughts on “Facts about Dopamine: A Happy Hormone”