What is blue light

Blue light is a beautiful and versatile color in the visible light spectrum that can be observed by the human eye.  Blue light is a short wavelength, in other words it produces higher amounts of energy.

Sunlight contains red, orange, yellow, green and blue light rays. Additionally there are many shades of each of these colors, which depend on the energy and wavelength of the separate rays (also called electromagnetic radiation). When combined, this band of colored light rays creates what we call “white light” or sunlight.

Without getting too complicated, there is a contrary relationship between the wavelength of light rays and the amount of energy they contain. Light rays that have comparatively long wavelengths contain less energy, and those with short wavelengths have more energy.

The electromagnetic rays barely ahead of the red area of the visible light spectrum referred to as infrared — they’re warming, but invisible. (The “warming lamps” you see maintaining food at the proper temperature at your local eatery release infrared radiation. But these lamps additionally emit visible red light in order that individuals will know they are on! The same is true for different varieties of heat lamps.)

The benefits of blue light

Blue light is everywhere in the world. In the past, the only source of blue light was from the sun. Now today we have brought blue light indoors by the way of digital screens (found on gaming systems, TVs, Smart phones, computers, laptops, tablets), and electronic devices, LED and fluorescent lighting.

Blue light wavelengths are natural and they are everywhere and surround us. In fact, they are the reason the sky appears as blue. These short blue wavelengths collide with air molecules, which cause the blue light to scatter and cause the sky to appear as blue.

They’re also a natural form that helps to regulate the body’s sleep and wake cycles, also known as the circadian rhythm.  Exposure to blue light during the day hours helps maintain a healthful circadian rhythm. Actually, there’s a therapy known as light therapy that is used to treat a type of depression — seasonal affective disorder (SAD) that’s related to changes in seasons, with symptoms that usually begin in the fall and continue through winter.  The source of light for this therapy releases bright white light that contains a significant amount of HEV (high energy visible) blue light rays.

It is important to note that too much blue light exposure at night can cause issues.  More on this to follow.

The dangers of blue light exposure

Up to this point, we’ve seen the good things that blue light possess.  However, an excessive amount of a decent factor is a dangerous factor.  Blue light is no exception when it comes to negativity from being over exposed to it.

One organ that is particularly vulnerable to blue light over exposure is the eyes.  Eyes don’t get high grades for protecting themselves from blue light at least not completely.   Frontal structures of the human eye  which consists of the cornea and lens are especially effective at screening UV rays from reaching the light-sensitive retina at the back of the eyeball. In fact, less than one percent of UV radiation from the sun reaches the retina, even without the wearing of sunglasses.

However, practically all visible blue light passes through the cornea and lens and reaches the retina.  This can result in some pretty serious eye issues.  These issues are addressed below.

Macular Degeneration—For starters, blue light over exposure can increase the risk of macular degeneration.  The macula is part of the retina at the posterior or back of the eye. It is very small— only about 5mm 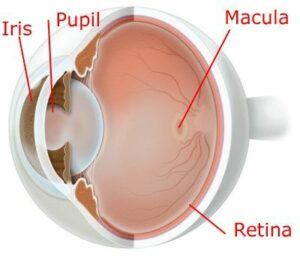 across. However it is responsible for all of our central vision, where most of our color vision and the fine detail of what we see take place.

The macula contains an extremely high concentration of photoreceptor cells that take in light and send signals to the brain, which interprets them as images. The rest of the retina governs our peripheral (side) vision. Macular disease causes loss of central vision.

Too much exposure to blue light will injure light sensitive cells within the retina.  This causes changes that match those of degeneration of the macular, which can lead to permanent vision loss. Studies have shown that it’s the accumulative result of this exposure that causes the injury, and which primarily affects the cones (the image sensitive cells responsible for central vision and color vision) and the retinal pigment epithelium (cells responsible for nourishing the retinal cells).  Lutein, a blue interfering pigment, is found in healthy human retinas and has been shown to protect against the blue light photo damage.  Time of day of the exposure may additionally be a crucial aspect, and research in this area is ongoing. 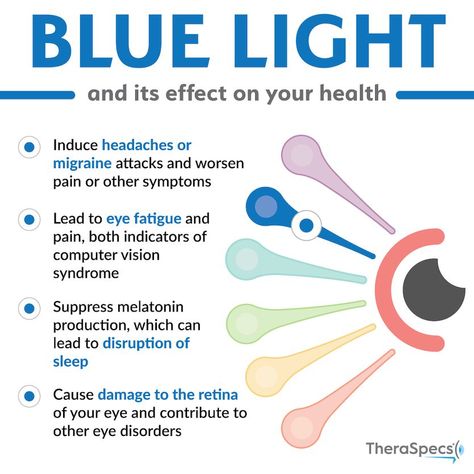 Cataracts— The human crystalline lens of the eye absorbs UV light throughout life and slowly yellows with time.  By the age of 20, it has yellowed enough to filter some but not all HEV blue light.  However, it’s current believed that this absorption throughout life could be a contributory aspect to aging and cataract formation.

Eyestrain—Computer screens and other digital devices give off significant amounts of blue light and individuals are spending more and more hours gazing at them.  The high energy blue light waves scatter further in the eye and are not as easily focused.  This scatter produces visual noise that reduces contrast and therefore contributes to digital eye strain.

Sleep problems—certain wavelengths of blue light can help boost mood, alertness, memory, and cognitive function.   Proper and timely exposure to HEV blue light helps the body to sustain wakefulness, and as the natural blue light (sun) wanes in the evening the restful cycle begins.  Therefore, exposure to an excessive amount of blue light during at night time through device screens and indoor lighting could result in poor sleep quality, difficulty falling asleep, and daytime fatigue.

Study behind study behind study has shown that light given off by electronic devices affects our sleep health. The understanding is that the blue light that LED screens can provide will slow or halt the development of the hormone melatonin, which signals our brain that it’s time for bed.

The eye health trade has acted in response to this matter by crafting filters and apps that filter the blue light from screens at suitable times, without affecting visibility.  Moreover, some lens manufacturers have developed special glare-reducing lenses and coatings to block HEV blue light.

Regarding the use of electronic devices with LED screens, there are precautions that can be taken to help decrease blue light exposure:

Blue light is obviously something that we can’t avoid altogether and it does have advantages.  However overexposure can have consequences.  Sight is vital to our well being and it behooves us to protect it as much as possible.

Please feel free to leave any question comment or concern below