I recently wrote an article on the urinary system.  In that article I mentioned the kidneys as one of the organs involved in that system.  This article focuses exclusively on the kidneys and entails specific information and facts about the kidneys.

What are the kidneys

The kidneys are organs of the renal system.  They are two (2) bean-shaped organs that play a major role in this system.  They are located on either side of your spine, below the ribs and behind the abdomen.  Each kidney is about four to five inches long, which is roughly the dimensions of a hefty fist.

What Do the Kidneys Do

The kidneys assist the body pass waste as urine.  They also help filter blood before returning it back to the heart.  The kidneys perform many critical 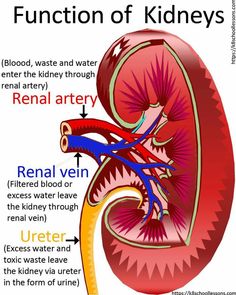 functions, including: regulating and filtering minerals from blood, maintaining overall fluid balance, generate hormones that help produce red blood cells, filtering waste materials from food, medications, and toxic substances, promote bone health, and regulate blood pressure.  All of the blood of the body passes through them a number of times a day.

How Do the Kidneys Function

Blood flows into the kidney, waste gets removed, and salt, water, and minerals are adjusted, if needed. This filtered blood returns back into the body.  The waste gets turned into urine that collects in the kidney’s pelvis which is a funnel-shaped structure that drains down a tube called the ureter a tube of muscle that pushes urine into the bladder.

Each kidney has around a million (1,000,000) tiny filters called nephrons. Nephrons are the most important part of the kidneys. They absorb blood, metabolize nutrients, and help pass out waste products from filtered blood.  Each kidney has about 1 million nephrons and each has its own internal set of structures.

After blood enters a nephron, it goes into the Malpighian body, also called a renal corpuscle. The renal corpuscle contains two additional structures:

The renal tubules are a sequence of tubes that begin after the Bowman capsule and end at collecting ducts.

Each tubule has several parts:

By the time fluid reaches the tip of the tubule, it’s diluted and crammed with urea. Urea is byproduct of protein metabolism that is released in urine.

Disorders of the Kidneys

As you can see, the kidneys perform a major in the overall function of the body.  The body simply becomes overloaded with toxins if the kidneys can’t do their regular job. Because of all of the crucial functions the kidneys execute and the toxins they meet, the kidneys are subject to various problems.

Some of these conditions are:

Chronic renal disorder  – is the progressive and irreversible destruction of the kidneys.

The most common causes of chronic renal disorder are high blood pressure and diabetes.

As mentioned earlier each kidney contains about 1 million tiny filtering units, called nephrons. Any disease that injures or scars the nephrons is capable of causing kidney disease. Both diabetes and high blood pressure (hypertension) can damage the nephrons.

High blood pressure can also damage the blood vessels of the kidneys, heart, and brain. The kidneys are highly  vascularized, meaning they contain a lot of blood vessels. So, blood vessel diseases in general are dangerous to the kidneys.

Autoimmune diseases such as lupus can damage blood vessels and can make antibodies against kidney tissue.

There are various other causes of CKD.  For example, renal disorder may be an explanation of CKD. Glomerulonephritis can be due to lupus. It can also appear after a streptococcal infection.

The risk of CKD increases for individuals older than age 65.  The condition is also hereditary.  It is more likely to occur in African-Americans, Native Americans, and Asian-Americans. Other risk factors for CKD include:

Kidney stones –  Also known as renal calculi, are solid masses made of crystals. They usually originate in the kidneys. However, they can develop anywhere along the urinary tract, which consists of:

Calcium – These are the most common. They are often made from calcium oxalate (though they will contain calcium phosphate or maleate). Eating fewer oxalate-rich foods can reduce the risk of developing this type of stone. High-oxalate foods include:

However it is important to note that, even though some kidney stones are made of calcium, getting enough calcium in your diet can prevent stones from forming.

Uric acid – This type of kidney stone is more widespread in men than in women. They can arise in people with gout or those going through chemotherapy.

This form of stone develops when urine is just too acidic. A diet heavy in purines can raise urine’s acidic level.  Purine a colorless substance found in animal proteins, like fish, shellfish, and meats is the culprit.

Struvite – This particular type of stone is found mostly in women with urinary tract infections (UTIs). These stones are often large and cause urinary obstruction. They are a consequence from a kidney infection.  The treating of an underlying infection can prevent the progression of struvite stones.

Cystine – Cystine stones are rare. They occur in both males and females who have the genetic disease cystinuria. With this type of stone, cystine — an amino acid that materializes naturally in the body, leaks from the kidneys into the urine instead of remaining in the bloodstream.

The greatest risk factor for kidney stones is making under 1 liter of urine per day.  Kidney stones are most presumably to occur in people between the ages of 20 and 50.

Different factors can increase the risk of developing a stone. In the US, Caucasian people are more likely to be inflicted with kidney stones than African American people.

Other risk factors include:

Symptoms of kidney stones may not occur until the stone begins to maneuver down the ureters. Kidney stones are known to cause severe pain. This severe pain is called renal colic. There may be pain on one side of the back or abdomen.  In men, the pain may expand to the groin area. The pain of this condition comes and goes, but is intense.  Individuals with renal colic tend to be restless.

Other symptoms of kidney stones can include:

Other kidney conditions include:

Symptoms of a Kidney Disorder

Kidney disorders can cause a range of symptoms. Some general ones include:

An individual that experiences any of the above symptoms  should contact their physician. Depending on the symptoms, he or she may do some kidney function tests to make a diagnosis.

The kidneys are crucial organs and they affect many other body parts, including the heart. If we follow these tips it will help to keep them working efficiently:

perform one of their most important functions: removing toxins.  Learn more about what proportion of water you ought to be drinking a day.

Use medications with caution – Regularly taking certain over-the-counter medications like nonsteroidal anti-inflammatory drugs, can cause kidney damage over time. Occasionally taking them is all right, but work together with your doctor to seek out alternatives if you’ve got a condition that needs pain management, such as arthritis.

There are more but bottom line: everything can have an effect on the kidneys because everything passes through them by way of the blood making them vulnerable to damage.  Moderation is the key.  Too much of anything can affect the kidneys.  While there is so much in what we consume that is good for us, too much of a good thing is a bad thing.

Good balance is the key to life!

4 thoughts on “Facts About the Kidneys”

Video – The Role of the Kidneys and How They Work