Calories! We hear about them every day: how many, is this low in calories, 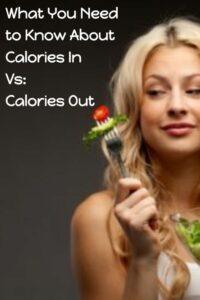 how many am I burning, how do I burn them, oh no that has too many calories! We try to avoid them like the plague! But do we really know what they are and what they do? Are they really that bad for you? Let’s take a good look at calories: the facts and see what it’s all about.

Table of Contents hide
1 What is a calorie
2 What do calories do
3 How many calories do we need
4 Calories and weight gain
4.1 Beware of empty calories

What is a calorie

A calorie is a unit of energy. Regarding nutrition, calories refer to the energy individuals get from the food and drink they consume, and the energy they use in physical activity.

There are two types of calorie:

The two terms large calorie and small calorie are often used interchangeably. This can be and often is misleading. The calorie break-down described on food labels refers to kilocalories. For example, a 300-calorie milk shake actually contains 300,000 calories.

When you hear that something contains a certain amount calories, it’s a way of describing how much energy your body could get from consuming it.

What do calories do

The human body needs calories (energy) to survive. Without energy, the cells in the body would simply die. The heart and lungs would stop, and therefore the organs wouldn’t be ready to perform the essential processes needed for living. Humans absorb this energy from the food and drink they consume.

If individuals consumed only the number of calories needed every day, they would probably have healthy lives. Calorie consumption that is too low or too high will eventually lead to health problems of one type or another. Balance is the key to all aspects of life—especially calories!

The number of calories in food tells us what quantity of probable energy they contain. It’s not only calories that are important, but also the essence from which the calories are taken.

Below are the caloric values of three main components of food:

Bottom line: it’s not the calories it’s what they measure-energy and we need energy. This is why we burn calories even when we do nothing. The automatic functions of our bodies require energy to function. However, the more activity we do, the more energy we need and the more calories we need to burn.

How many calories do we need

However, not everybody needs the same number of calories each day. People have dissimilar metabolisms that consume energy at different rates, and some individuals have more energetic lifestyles than others.

The suggested consumption of calories per day depends on several factors, including:

Calories don’t weigh much themselves, but like snowflakes, put enough of them together you have an issue. Excess calories are collected as potential energy, typically in the form of body fat. Small amounts are also stored in the liver and muscles as glycogen, a storage form of glucose used for short-term energy. This process if allowed to perpetuate can lead to obesity and other serious health issues.

To control weight gain, an individual needs to keep their caloric intake in line with the rate their body burns them.

If only it were that simple. Counting calories by itself doesn’t work because in the end it matters where those calories come from. This matters more than the number of calories consumed. The focus on the low-fat diet has caused some problems.

It is true that fat contains more calories than carbohydrates, including sugar. But that doesn’t mean that a sugary beverage is better for you than a handful of nuts. That’s just not what the studies have shown. Looking only at calories overlooks the metabolic effect of each calorie. In other words, the source of the calorie changes how an individual digests it and how one might retrieve energy from it.

Therefore, we can’t totally disregard fat. It just needs to be one of the healthy fats like avocado, olive oil, and nuts. So one should not cut out the fat, or make a habit of eating products labeled fat free.

At one time carbohydrates were categorized as simple or complex. But these classifications were misleading. Many doctors are off from those narrow categories and moving toward the all-encompassing terms of high glycemic index and low glycemic index. For example, an apple is a simple carbohydrate because it is digested quickly by the body, but fruit is better for you than other simple carbohydrates such as chips or crackers. That’s the glycemic index is viewed as a more accurate measure of a food’s value (good or bad). When something features a low glycemic index, it raises an individual’s blood glucose levels slowly, increasing the insulin levels gradually.

This is beneficial, because excessive insulin spikes result in insulin resistance, where the body stops responding to insulin it is producing (also known as type 2 diabetes). High-glycemic foods, on the other hand, cause 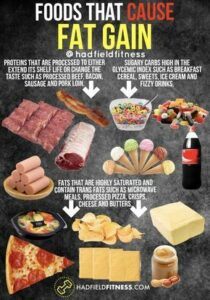 blood sugar levels and thus insulin to rise quickly, prompting the overproduction of insulin and fat accumulation. It is best to focus on low-glycemic foods like wheat bread, fruits, whole-grain pasta, nuts and beans. High-glycemic foods include candy, croissants, and scones. *By choosing the low-glycemic foods and as well as the minimally processed foods, individuals can lose more weight, feel fuller for longer periods of time, and thus remain healthier.

Some additional low glycemic foods are:

Some additional high glycemic foods are:

Something to note: even as much as high glycemic index foods are dangerous for some people (e.g. diabetes), health experts also do not suggest an individual to completely eliminate all high GI foods from their diet. One can only work towards the goal of eating more of low and medium glycemic index alternatives of such foods.

Even though some foods could also be high in glycemic index, they’re also low in calories and highly nutritious concurrently. Therefore, one must not completely give up on such foods. A good example would be Watermelon. Learn more about whether or not to follow a low glycemic index diet here. 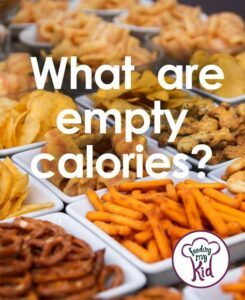 According to ChooseMyPlate.gov, a diet administration tool from the USDA, empty calories come mostly from solid fats and added sugars.

However, they additionally add many calories and are major contributors to obesity.

Because of this, fast food is an issue in the US. Researchers from the Centers for Disease Control and Prevention (CDC) printed a report in 2013 that showed 11.3 percent of calories consumed by people in the U.S. come from fast foods.  Nutritionists and healthcare professionals believe this percentage is too high.

As people age, they have a tendency to induce fewer of their daily calories from fast foods. Fast foods compose only 6 percent of the daily calorie intake of older adults.  They tend to have more stable schedules and more apt to prepare and eat meals at home.

However, with the amount of highly calorific meals served in restaurants or aimed toward younger individuals, it’s important that individuals pay close attention to where they get their calories.

Other sources of empty calories

The foods and drinks below provide the largest amounts of empty calories:

Sugary drinks are the primary supplier of empty calories for individuals in the U.S. More than half of the people within the U.S. have at least one sugary 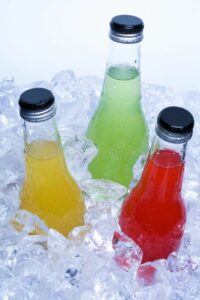 It is better to avoid them in general and as an alternative consume water, fat-free or 1 percent fat milk, one hundred percent fruit beverage, and low-sodium vegetable juices.

The intake of empty calories can be evaded or considerably curtailed by integrating fresh, healthy food and drink into the diet.

4 thoughts on “Calories: the facts”

Video – What Are Calories