We live in a plastic world—literally! Plastic is everywhere! But did you know that there is plastic in our bodies as well? Read this article to find out about microplastics in the body.

For any individual living in the United States, plastic is nearly impossible to avoid: It is in the lining of canned goods, is hidden in household dust, seeps out of storage containers, contained inside of toys, electronics, shampoo, cosmetics, and countless other products. Numerous single-use items are continuously produced from forks and grocery bags to candy wrappers with plastic.

The purpose of this article is to bring awareness of this potentially serious situation.

Microplastics are very tiny (micro) pieces of plastic that pollute the environment.Microplastics are not a specific kind of plastic, but more precisely, any plastic fragment that is less than 5 mm in length, according to the U.S. National Oceanic and Atmospheric Administration.

Microplastics can result from both commercial product development (primary) and the breakdown of larger plastics (secondary).

Primary
microplastics are tiny particles intended for commercial use, such as cosmetics, in addition to microfibers shed from clothing and other textiles, for example, fishing nets. Secondary microplastics are particles that result from the breakdown of larger plastic items, such as liquid (e.g.water) bottles. This breakdown, which is caused by exposure to environmental factors, consists mainly of the sun’s radiation and ocean waves.

These particles can be harmful to the environment and animal health.

Why is Microplastics a Problem?

It is a known fact that plastic is a big problem. For example, there has been a drive to curb the use of the plastic bags we have become so used to and the concern of the copious amounts of plastic bottles we use. However, in recent years, what has become clear in recent years, is that there is additionally a significant consequence of plastic that is not so obvious. These tiny pieces of plastic are a big problem. Even though they are smaller, that doesn’t mean that we should ignore them because they cause devastating harm to marine life and health. Additionally, the plastic can remain in the water forever!

The problem with microplastics is that as with any size plastic, they do not easily break down into harmless molecules. They can literally take hundreds or thousands of years to decompose, and in the meantime, wreak mayhem on the environment. On beaches, microplastics are visible as tiny multicolored plastic bits in the sand. In the oceans, this microplastic pollution is consumed by marine animals.

Some of this environmental contamination is from littering. Still, a large amount is the result of storms, water runoff, and winds that carry plastic, both whole objects and microplastics, into the oceans. Single-use plastics, plastic items meant to be used only once and then discarded, such as straws, are the primary source of secondary plastics in the environment.

Microplastics have been identified in marine organisms from masses of tiny animals and plants to whales, commercial seafood, and even in drinking water. Unfortunately, standard water treatment facilities are unable to remove all traces of microplastics. To additionally complicate matters, microplastics in the ocean are capable of binding with other harmful chemicals before being ingested by marine organisms.

Microplastics in the Body

The situation of microplastics is insidious. Most of us don’t realize it, but we are ingesting plastic. Whether we are drinking water or eating food, we are most likely taking in small particles of plastic along with it. These particles are ubiquitous and unavoidable. There is such a massive amount of plastic around that we even breathe in tens of thousands of tiny plastic fibers fragments or every year.

One research analysis released in June calculated that merely breathing, eating, and drinking, Americans ingest at least seventy-four thousand (74,000) microplastic particles every year. Additionally, another recent study commissioned by the World Wildlife Fund and managed by researchers at the University of Newcastle in Australia projected that individuals consume about 5 grams of plastic a week — roughly comparable to that of a credit card. However, that research is still under examination.

There has, for quite some time, been worry that the chemicals in plastics could have a wide range of health effects. A new lab study suggests that microscopic bits of plastic have in all probability taken up residence in all of 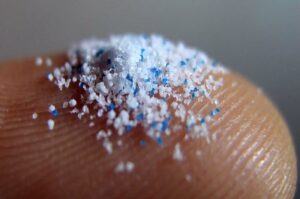 the significant filtering organs in our bodies,

Researchers have found evidence of plastic pollution in tissue samples removed from the spleen, liver, lungs, and kidneys of donated human cadavers.

The research is new; therefore, there isn’t enough information available to conclude precisely how microplastics affects human health. However, logic dictates that there are issues, looking at the big picture.

It is probable that ingesting microplastics can further expose the population to chemicals found in some plastics that are known to be harmful. These chemicals have been linked to a variety of health problems, including obesity and reproductive harm, plus issues such as organ problems and developmental delays in children.

In animals, there is evidence that microplastics have the ability to cross the hardy membrane that protects the brain from many foreign bodies that get into the bloodstream. Additionally, there’s some evidence that pregnant women may be able to pass microplastics to a developing fetus through the 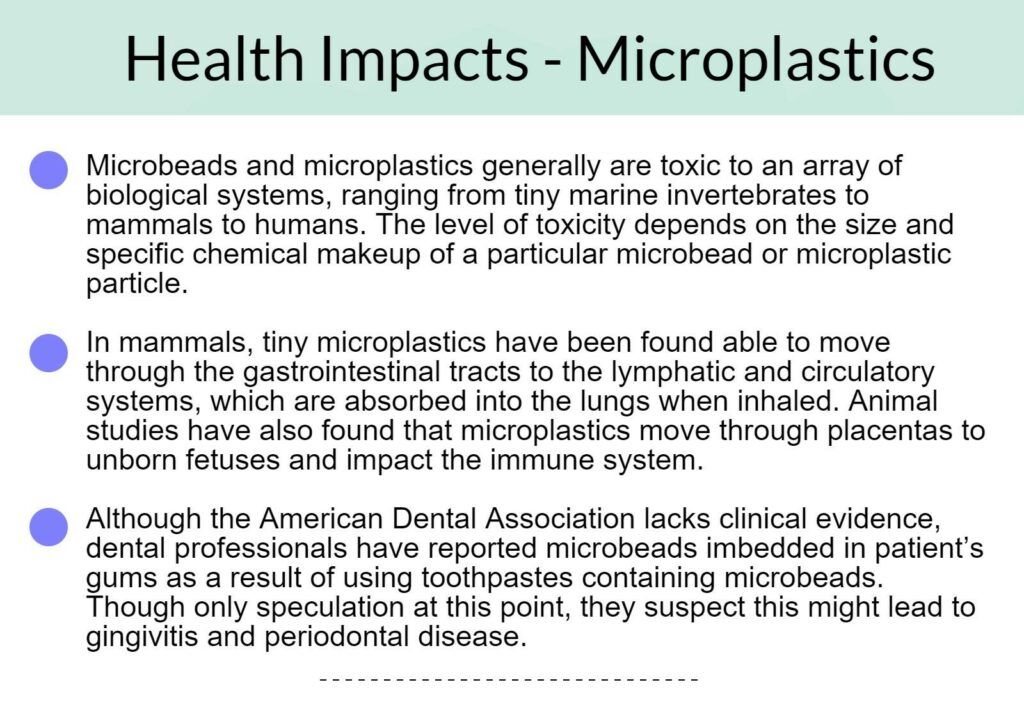 placenta, according to research that has not yet been published but was presented at a spring conference at the Rutgers Center for Urban Environmental Sustainability.

Some of these microplastic particles could leak bisphenol A and phthalates. Bisphenols are known to intervene with hormones, and there are studies connecting bisphenol exposure to reduced fertility in men and women. Phthalates are also additionally known to disrupt hormones, and prenatal exposure to phthalates is linked to lower testosterone in male offspring.

Styrene, another chemical found in plastic and some food packaging, has also been linked to several health issues, including nervous system problems, hearing loss, and cancer.

Once these chemicals are inside of the body, even low doses may affect us.

In 2018, the American Academy of Pediatrics (AAP) released a statement advising that families reduce exposure to these chemicals.

The American Chemistry Council, another industry group, said in a statement to Consumer Reports that plastics used for food packaging must meet strict FDA (Food and Drug Administration) safety standards. The statement reads: “To help evaluate the safety of our food, FDA reviews safety information on food packaging materials, including whether tiny amounts of substances could potentially migrate from a package into its contents. Through rigorous analysis, the health experts at the FDA have determined these products to be safe for their intended use.”

But there isn’t total agreement that there’s sufficient oversight. Companies can designate substances that come into contact with food as “generally recognized as safe” (GRAS) without providing peer-reviewed safety evidence to the FDA; a policy Consumer Reports has formerly identified as something that can subject consumers to risk. The 2018 AAP report criticized the long list of chemicals that come into contact with food; that report states these chemicals should be more strictly regulated.

So we must be aware!

How to Mitigate Exposure to Microplastics

While we are unable to avoid microplastics or the chemicals found in plastic wholly, these simple steps can help prevent unnecessary extra exposure at the least: 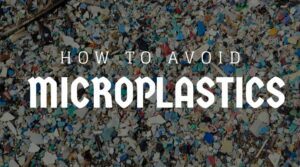 Drink tap water. Drinking water is one of the most significant contributors to microplastic ingestion. Still, bottled water has about double the microplastic level of tap water, according to Sherri Mason, sustainability coordinator at Penn State Behrend, and a chemist who has studied plastic in bottled water, tap water, sea salt, and beer.

Avoid heating food in plastic. Heated plastics are known to leach chemicals into food. The American Academy of Pediatrics additionally recommends not putting plastic into your dishwasher.

Avoid plastic food containers with known issues. The AAP report documented that recycling codes “3,” “6,” and “7” in that order indicate the presence of phthalates, styrene, and bisphenols. It added that if these products become labeled as “biobased” or “greenware,” they do not contain any bisphenols.

Consume more fresh food.
Although the levels of microplastics in fresh produce have been mostly untested, they are least likely to expose one to unwanted chemicals, according to the AAP, especially when contrasted with items wrapped in plastic.

Minimize household dust.
Even household dust can expose individuals to chemicals, including phthalates, per- and polyfluoroalkyl substances, and flame retardants. Dust can also contain microorganisms. Vacuuming often can help reduce household dust exposure, according to the Silent Spring Institute.

Consider the big picture. We can take action to limit our plastic exposure. But effective, large-scale solutions will require minimizing the quantity of plastic used overall. The experts say that individuals should select products packaged in glass instead of plastic, use reusable nonplastic containers whenever possible, and support policies limiting the use of single-use plastic.

Scientists are actively researching the impact of plastics on the environment and the human body. In the meantime, we must be aware of this situation and minimize our exposure to microplastics until more definitive information becomes available.

Please leave all questions, concerns, and comments below.

2 thoughts on “Microplastics in the Body – We live in a plastic world—literally!”

Video – Microplastics in the Human Body